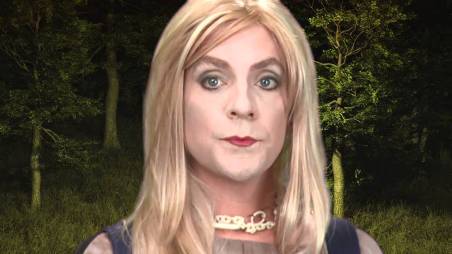 Good evening, America. Chloe hath returned! And this time, she has friends. It’s been a while since Chloë Sevigny graced our YouTube screens with her high-concept hipsterdom and self-righteous fashion victimhood. Chloë’s ‘discoveries’ range from toast to birds. I couldn’t live without her ostentatious pearls of wisdom, like “It’s recently come to my attention that I love sending inappropriately astute texts to Tippi Hedren, Taraji P. Henson and Gorbachev.”

Actor Drew Droege AKA Chloë Sevigny dropped the latest video about an hour ago, 19:30 June 17th LA time. And it’s already picked up more than 3000 hits! In the latest Chloë installment it comes to her attention that she has friends, a discovery she stumbles upon while looking for a date to Scottish Luncheonette. In typical Chloë style she recounts her ‘favorite’ friends. The impressive list of over 55 people includes Lisa Rinna, Billy Joel, Candice Bergen, Linda Evangelista, Shakespearean actor Albert Finney, even Ghostface Killah from Wu-Tang Clan.

The soon-to-be viral hit cleverly ends with a plug for Drew’s new film, You’re Killing Me, screening as part of Outfest, the annual LA festival promoting LGBTQ stories for the screen. The comedy slasher has roots in Patrick Bateman and Freddie Kruger, and is co-written and directed by Jim Hansen, one of the creators of the Chloë videos. It stars a cadre of Los Angeles gay comedy faves including Sam Pancake, and Jack Plotnick.

Despite Drew Droege’s seemingly overnight success with the Chloë franchise, he said in 2012 the first time he played Chloë on stage, he bombed; “if a bomb can be silent, humorless, horrible, and confusing all at the same time. For years, I played live shows and never knew if it would be a hit or a quiet-death nightmare. Then Jim Hansen came along and wanted to make videos. Then it became a thing. It still surprises me to this day that people like it—because many didn’t like it at first.” Thank God Drew didn’t give up!

If you live in LA you can check her out at her new gig, hosting Bears in Space on Sunday’s at the famous Akbar on Sunset Blvd, Silver Lake.